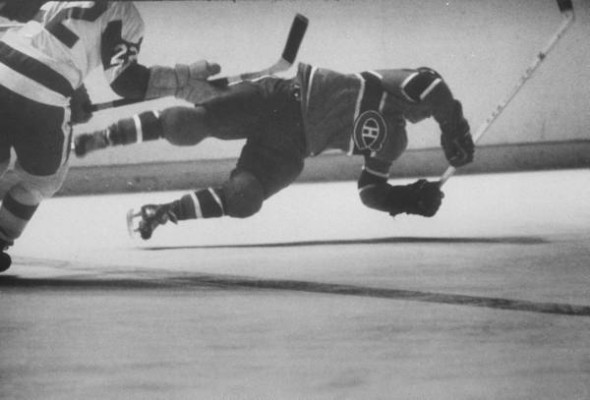 “How different the world would be today,” I found myself musing recently to an acquaintance, “if only the Montreal Canadiens had scored the overtime goal in Game 7 of the 2011 playoffs.”  There is something about the completely arbitrary, could-have-gone-either-way nature of a defeat by sudden death that punishes the brain repeatedly over time.  And yet the triumph of evil over good packs significant and unpredictable consequences.

“How so?” he asked sceptically.  “No Vancouver riots,” I replied.  His eyes popped slightly wider in a “My god, he’s right!” moment of realization.  Even as I saw him struggle to refute the claim, I could also see the truth of it (or at least the possibility of the truth of it) register behind his eyes.  Life is full of crazy and improbable what-ifs:  Trotsky instead of Stalin, Neanderthal instead of Homo Sapien, Montreal instead of Boston.  The mind reels.  Has anyone ever suggested that life is fair?  But things could be so different, if only…  During that series I remember smiling while reading Adam Gopnik’s assessment that Habs vs. Bruins was essentially elves vs. orcs, elegant speed vs. brainless thuggery, good vs. evil.  Even making the allowance that it is possible that Vancouverites would have burned their own city to the ground no matter what team eventually defeated them in the final, there is something just Satanic enough about the character of the Boston Bruins and their style of play to suggest that it could only have been their victory alone that facilitated the opening of Hell’s maw underneath the otherwise pacific Terminal City.

Bygones eventually do become bygones, of course, but the bandage was ripped freshly from my skin again recently when last year’s Bruins were invited to Barack Obama’s White House to complete the malevolent victory lap due them as American champions, never mind that if a Canadian team had won, this invitation would never have been extended, thus creating another reality in which Tim Thomas is still merely a nice, very skilled goaltender and nothing more.  To remove the final plank concealing how unarguably evil this particular version of the Boston Bruins is, the cuddly goaltender turns out to be a card-carrying “you betcha” tinfoil hat wearing opponent of the only actually interesting, absolutely competent, intimidatingly intelligent, fully articulate President of the United States since Woodrow Wilson.  And he publicizes his principled absence via an allcaps manifesto emanating from social media, like a high school student announcing that he won’t be attending the prom because it’s bullshit.  I remember watching his whimsical sparring with reporters during the playoffs, his sassy little lisp hinting at something a bit intriguing behind the moustache.  It turned out that he was, of course, happily married and familied up.  Bear fanciers everywhere no doubt heaved a gentle sigh of regret.  What if, Tim.  What if, indeed.

It did turn out, however, that the goaltender harboured a terrible secret.  I had no idea that, like lots of perfectly intelligent, liberal minded people I believe to be quite sane until I start talking to them, he merely doubts the official narrative around climate change.  Any thinking person does, of course.  And what about those buildings being taken down by some random gang of Saudi nonentities?  You’d have to be stupid to believe such nonsense.  Anyone who knows anything will tell you for free that we’re headed into Road Warrior times, during which the INDIVIDUAL will stake a final claim for freedom during an apocalyptic struggle against the socialist regime of Barack Hussein Obama.  And the room slowly empties around you while these people expound their theories, and you check your watch, dreaming up any kind of escape plan.  Bring on those end times.  Preferably right now.

I don’t hold an ancient grievance against the Boston Bruins franchise.  I didn’t grow up hating them, like many people who are raised in senseless prejudice.  In fact, they were the team of the improbably handsome and skilled Bobby Orr, who once signed a photo for me when I was a boy, a moment I still cherish in my mind.  My father, who pushed me forward to obtain that autograph, children being tougher to refuse than grown men with pens and photos, recently blurted out, “I hate the Flyers,” referring to Philadelphia.  I have no idea why.  Maybe he once ate a bad Philly cheesesteak or something.  I can’t grasp hatred of any particular team or group or city without good reason.  I remember my childhood self infuriating both my dad and my grandfather while they watched a match on television, pointing out the absurdity of rooting for any one team over another, given that the players just get traded from city to city year over year.  So you can believe me when I say, I have never held a historical grudge against the Boston team.  No, it is these particular Boston Bruins that I hate: with their satanic captain, their ratfaced jester, their disingenuous cheap-shot artist, and now their churlish little goaltender.

But getting back to the Montreal Canadiens, the team that I still love, despite their many problems, I have both tribal and historical reasons for remaining loyal.  Being a modern person and having no ethnic or group affiliation does create the kind of need that can be quite harmlessly filled rooting for a sports franchise.  Alternative forms of affiliation tend to be quite a lot more toxic.  The sense of inclusion when the Habs are doing well is intoxicating.  The mood improves noticeably.  The streets of Montreal are alive.  Ah, memories.

In the meantime, it is difficult being a bleu-blanc-rouge partisan during a year in which it looks increasingly unlikely that they’ll even make the playoffs.  The city’s media is unhappy, the coach is unhappy and can only express that unhappiness in English, the Quebec government is unhappy both because of the downturn in the team’s fortunes and because of the coach’s inability to express his unhappiness in French, everyone is unhappy.  And in our unhappiness, even small victories can seem larger than they are.  A little like the slightly fishy claim that money can’t buy you love, you can console yourself with the hope that victory tastes doubly sweet after a period of hardship and defeat.  At least Tomas Kaberle got to visit the White House.  He’ll no doubt tell his teammates how awesome it was when he gets back to Montreal.  And as a cowed looking Hal Gill explained to a locker room reporter shortly after Mike Cammalleri was fired for referring to the team’s losing mentality, “We’re losers until we win.”  Here, then, is to the future, when we win again.  And here’s to the landslide re-election of Barack Obama in 2012.

Update: I am not above a little Schadenfreude.

Le Canuck: Another Use for Maple Syrup

One bad experience with a certain type of booze … Read More :::

My Evening With Google Glass