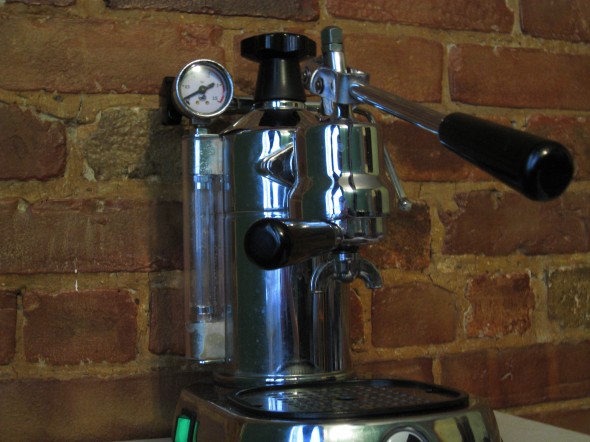 I sometimes feel that the day I finally grew up and became a man was the day I acquired and started using a La Pavoni coffee machine.  This happened a few weeks ago.  For the first several days, I kept stealing looks at it as it sat on the kitchen counter, gleaming like a prize from another century, past or future.  It combines elements of something like a highly technological samovar, a stainless steel Dalek, or possibly a time machine powered by a Tesla coil.  Going out the door in the morning was sad as I looked backwards, catching a glimpse of its silver figure sitting on the counter.  I couldn’t wait to get home to both use and look at this machine.  I feel lucky.

I never did have much luck with internet classifieds, which is where this machine showed itself to me initially.  I’ve been both ripped off and underwhelmed buying and selling things online.  And it was a last-minute decision to check the used kitchenware column online after weeks of research about which coffee machine would make the best possible purchase.  After more or less eliminating the higher-end espresso machines, both for cost and counterspace footprint, I finally narrowed things down to an automatic machine that looked a little like Darth Vader’s helmet, but would, according to its reviews, dispense a perfectly good and absolutely uniform cup of coffee time after time at the push of a button.

The La Pavoni is what’s known as a manual machine.  It wouldn’t be sufficient to say that the difference between it and the automatic machine I had settled on was comparable to the difference between an automatic and a manual car.  It’s more like the difference between a bullet train and a steam engine, with live men constantly shovelling coal into the engine’s fiery, all-consuming maw.  Reviews that I read of the La Pavoni online scored it surprisingly low, which put me off until I realised that the sample had been distorted by people who were expecting a god-like machine that produced perfect coffee forever but then became easily frustrated by the fact that no two cups of identical coffee could ever be produced by the damned thing.  But that is exactly why I wanted it.  To make cups of coffee the way the sky makes snowflakes.

Those reviews by people who preferred a push-button approach to coffee were luckily corrected by account after account of, “I purchased a La Pavoni in 1972 and ended up giving it to my son who needed a coffee machine for college, and anyway I wanted to buy a new one,” or words to that effect.  I was struck by how indestructible they seemed, wondering how a company that hadn’t figured some kind of planned obsolescence into their product design could even stay in business.  If the thing never breaks down, where will your repeat business come from?  Customer happiness and loyalty, I suppose.

Up to this point, I had got used to drinking coffee from bars that made it well enough and never thought I would have the resources or kitchen space to really dedicate to a proper espresso machine.  Honestly, the best method for making coffee I’d found up to this point was the AeroPress, which is a surprisingly low-tech plastic tube that looks a lot like a syringe and makes a nice, strong cup.  As I looked into pursuing the dream of making more advanced coffee, I began to lose hope.  And then, on a whim, I checked the classifieds, spotted that ad and contacted the sellers.

They were a Russian couple of fairly advanced age who lived in Pierrefonds, a suburb of Montreal.  So a visit was in order to this alien place where people live in homes separated from each other by lots of yard space and greenery all around.  The streets were completely free of sidewalks.  While finding the address, I had the feeling of being an intruder, like someone on neighbourhood patrol might step out and ask to see my papers.  Ringing the bell, I had an instantly good feeling upon meeting the sellers.  It turned out that they had purchased the machine two years earlier during a trip to Italy and that the husband used it only occasionally, the reason for this being that he had recently acquired a more serious machine.  How serious?  The man roasts his own green coffee beans in the shed out back, that’s how serious.  He made me a coffee using the La Pavoni that was close to perfection there in the kitchen, so I closed the deal immediately.  The wife was angry that he was getting rid of it.  She had a sentimental attachment that she associated with their time in Italy, and also it happens to be a spectacular looking object.  I assured them it was going to a good home.  He let me know that another prospective buyer who was scheduled to come by later would be disappointed.  It was just a matter of luck that I was first.

Meantime, over the last several weeks I’ve made dozens of cups of coffee with the thing, some approaching transcendentally good, but many I would describe as watery, bitter or somehow otherwise lacking.  Most of them are almost there, and it drives me crazy which variable I was missing that could have produced a more perfect shot.  It’s temperamental.  Part of both the joy and frustration lies in figuring the thing out.  I think I’ll stop short of referring to it as “her” instead of “it”, at the risk of sounding truly creepy.  Anyway, there are so many variables:  fineness of the grind, how hard I tamp the coffee down into its basket, how much coffee I use, when I raise the lever relative to how much pressure has built up in the steam head, how fast I raise the lever, how fast I lower the lever.  When the Russian couple told me that a lot of people find this machine more trouble than it’s worth, I let them know that for me, the temperamental nature of the machine is a source of pleasure.  The pleasure I’ve had, just from the quality of coffee produced by the thing, has easily outweighed any trouble.

An Invitation to Meat

A while back, I received a phone call from … Read More :::

Wimbledon is said to be the right time to … Read More :::