On June 20, 2013, Montreal officially installs a final missing jigsaw piece into a yawning void that has been empty by decree since 1947, during the famously even-more-corrupt-than-now Duplessis era. It will finally allow food trucks to roam the streets (or at least set up in designated areas so as not to interfere with antsy restaurateurs, etc.).

I must clear my throat and say in advance that I will be eating at these trucks almost every time I see them, as the food will no doubt be excellent and make summer in Montreal (already exciting by any kind of standard) even better than it would have been anyway. It’s exciting.

In 1947, Montreal’s mayor was the larger than life, anti-conscription and pro-Fascist Camillien Houde, and Montreal was renowned as a sort of open-air brothel and focal point for vice, joy, excitement and danger in North America, with a jazz soundtrack.

Just at this moment, as the food trucks begin to roll, Montreal has no mayor. He’s facing corruption charges and has had to resign and the city will function for a short time until an interim can be installed. It’s a funny little period of suspended animation at the municipal level, and perhaps an appropriate time-tunnel moment for street food to suddenly arrive from Houde’s over-the-top, almost operatically corrupt time into ours. Montreal has changed a great deal in the meantime, and how the city is treating the food trucks is indicative of the change in moral weather since that time. We’ve held on to all of the corruption, and retained almost none of the joy.

One can’t help but run the thought experiment of how different this city might be today if street food had not been outlawed all those years ago. We could all have been dining on smoked meat sandwiches, poutine, oreilles de crisse, pine soda or those weird little sandwiches from Wilensky’s at sidewalk carts for several generations now. What an amazing alternate reality. I can barely contemplate it, it’s so beautiful. It would be great if the awakening of street food were to evolve in just that way, interrupted as if by a Brigadoon-like stretch of forgetting, and then a sudden remembrance, “Oh, wait. We don’t have any street food.” 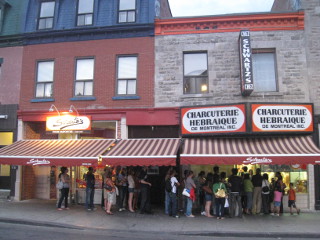 As things stand, however, street food is being rolled out after years of debate, consultation, anxiety from restaurant owners over unwanted competition, etc., and carefully crafted via a highly mediated, focus-grouped, expert opinionated, totally inorganic, Year Zero kind of method. It is being presented to the public as if street food were some kind of foodie art project, or not so much an opportunity to grab a tasty, joy-inducing snack, but instead a food-based immersive experience, with an emphasis on craft, quality and moral uplift. Each bite will be a mini-exercise in consciousness raising and an opportunity to really connect with the meaning of food, rather than, say, a nice knish that you simply feel like munching on as you wander through town.

Better late than never is the very least one can say without damning the whole exercise with faint praise. If only we were seeing the development of a type of robust, interesting, organic food culture that’s a genuine expression of each neighbourhood, rather than an aesthetic and essentially moralistic exercise. It could be so much better.

Each and every time I go to Toronto, I get off the train at Central Station, walk out the front door and buy a sausage sandwich slathered in mustard and/or onions and hot peppers on a toasted hot dog bun. My friends who live there don’t understand my appreciation of what they call “street meat”. It’s partly because I can’t get it here, owing to the street food ban. It’s also because those sausages are freaking delicious.

The thing is, even with the lifting of the ban, I still can’t get those sausages here. I will still make a beeline straight for that cart after each train journey and still get a shot of endorphin that will remain unavailable to me in Montreal, shot through as each bite of the food here will be with a tiny morsel of superiority.

Trucks will be allowed after being approved by a kind of central committee, who will evaluate potential vendors based on some rather steep criteria. The rules around street food are going to be that 1) it’s sold out of a truck, so no carts or small sidewalk vendors, and 2) the vendors have to have some kind of profile in the foodie or restaurant community and aspire to an “innovative, talented, inspired, creative and deliciously prepared” approach.

The approach, method and attitude towards food are puritanical. Delicious, yes. But puritanical.

Montreal’s street food experiment has already been criticized for its class shortcomings, and rightly so. The author of that rather pungently headlined piece, however, folded like a card table on the public radio when challenged to debate the subject. It was an opportunity wasted.

Again, do not get me wrong. Fancy taco trucks and raclette wagons excite me. I will be eating at them. But none of it excites me the way the sense-memory of the average Mexico City taco cart thrills me. Or being able to randomly buy a knish or a hot dog from a completely unpretentious sidewalk cart vendor in New York. I’ll be hitting them all eventually, with reservations.

(Day One update: the Bun Bo vermicelli bowl from the Saigon, Je Me Souviens truck is, of course, terrific.)
(Day 2: Beef tartare on a hotdog bun and fries with some Parmesan on top, from the Route 27 truck. Tasty, yes, and $14. So we’ve engineered a situation in which we’re paying restaurant prices for street food. On the other hand, munching tartare while a vast Idle No More protest snakes its way through downtown provides the kind of détournement you won’t get sitting in a restaurant.)
(Day 3: Rain.) 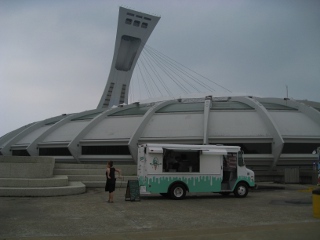 (Day 4: Mr. Crémeux ice cream truck, the token dessert vendor participating in the programme, serving soft serve vanilla and barbotines (French for slushies). The soft serve coupe with caramel, almonds and bretzel is excellent.)
(Day 5: St-Jean Baptiste Day. Turkey vindaloo sandwich from Le Gourmand Vagabond. Nice. Subtle to the point of nonexistent vindaloo flavour, and a bit heavy on iceberg lettuce. Great house tomato/cucumber juice, though, with a nice habanero kick.)
(Day 6: Calamari pad thai and papaya salad from Tuktuk. Great. Some guy complained there was no English on the menu sign. He’s part of a Montreal species called the “angryphone”, an eternally put-upon and victimized type of citizen. At the lunch hour, city council met and voted in an interim mayor, so I can stop these reviews now. But you get the idea.)

It is certainly good to have standards, but the top-down committee approach taken in Montreal is entirely in keeping with the kind of food worship attitude towards the act of cooking and eating that has basically sucked the joy out of North American food culture over the last 10 years or so. I’m all for quality ingredients and knowing all about where your food comes from and buying from farmer’s markets and all that. But I am not into the cultish aspect and judgey weirdness that shines through every crack in the foodism scrim. There’s something stifling about the idea that each lamb curry taco or kimchi burger is an opportunity for a teachable moment in a way that a greasy sausage or al pastor taco sold off a cart can never be.

Update: Now that we’re hearing the stories of trucks that jumped through all the city’s hoops and were rejected, the committee approach becomes yet more untenable. Let any vendor who meets the health and safety standards roll out as they see fit, and then we can talk about Montreal street food.

It’s enough to make one sentimental for 1947.

Montreal by Night by Arthur Burrows & by Jean Palardy, National Film Board of Canada