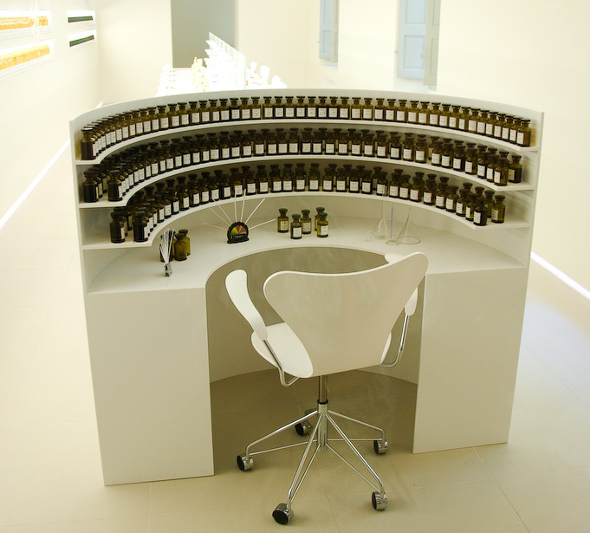 Both the purpose and the nature of perfume are almost impossible to talk about or define. If its purpose is to delight the senses, why is so much of it so foul-smelling and in-your-face? Is it something you wear, like clothing? Or is it more like furniture, designed to change the nature of a room, external and complementary to the wearer? It’s only every once in a while that a scent bothers you in a positive way, gets under your skin and intrigues you. It’s at moments like these that you need expert guidance. I have these friends who are fragrance acolytes, and so decided to have them explain it to me. Robin and Daniel, when together, can discuss fragrance for hours. Daniel’s fridge has almost no food. It contains perfume bottles instead.

When I suggest that most people probably don’t put that much thought into the clothing they wear, much less what they scent themselves with, he replies, “It’s not even thought, really. You know when you wake up and you think, ‘Where’s that Cap’n Crunch? I gotta have that Cap’n Crunch.’ It’s the same. You wake up and it’s raining and you think, ‘Where’s my Garrigue?’”

But getting back to climate, he continues, “Some things just project differently in different temperatures. See, there’s seasonal stuff, too. Like, in winter I tend to wear Opium. It’s strong. It’s something with the cold air. You can smell certain parts of it better than others. In the humidity, it tends to get a bit of amber too much. But in the winter you get more of the top notes with vanilla for some reason. That’s what I feel like. And then in humidity, there are some lighter perfumes that smell more summery and fresh.”

Robin points out that Daniel has a contrarian streak by perfume fancier standards, opting quite often for a strong scent in strong heat conditions, like Cuir Mauresque or Muscs Kublai Khan (both Serge Lutens brands). (P.S. Things I learned while talking to Daniel and Robin: “musk” is a glandular secretion emanating from the testicle of either a male deer or a smaller animal like either a civet or, you guessed it, a muskrat. The muskrat never struck me as a particularly masculine beast, but I have a whole new appreciation for the little rodents now.)

Daniel claims that Lutens’ perfumes start out amazing, and then over the course of three hours tend to end up too dry smelling. “In the heat, it’s better. Somehow the humidity fills in that dry, ashy aspect of them. And he lives in Morocco, where it’s humid.” 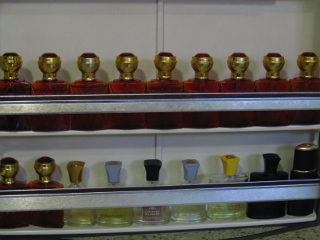 As for a scent that Daniel appreciates but doesn’t wear very often, he offers up Serge Lutens’ Fumerie Turque, a dark smelling, leathery, jasminey perfume.

Robin’s got a beef with the plethora of commentators on mainstream news websites, who frame the decision-making process around selecting perfumes as more to do with, “What’s your personality?” than “Which scent is most appropriate to a given scenario?”

“I don’t think of it as something that’s me. I think of it as a work of art,” she says, “and I’m enjoying it as such. Not that it’s associated with me, or anything about me.”

As for the genderization of perfume, both Robin and Daniel agree that it comes down to marketing. Eighty percent of scents are marketed to women, and the characteristics of a particular bottle are sharply divided between “male” and “female”, but if you remove the marketing, things become both more open and complicated.

Daniel also feels that his sense of smell has improved, or changed, since taking up perfume. “It’s like listening to music. They call it notes for a reason. Because it’s not visual. You can’t see anything.”

Probably the big surprise from our discussion was their mutual conviction that Drakkar Noir, a perfume with a famously bad reputation, has been unjustly maligned, and unfairly used in popular culture as short-hand for a certain type of douchebaggy man. So perhaps it’s time to rescue the reputation of Drakkar Noir? Daniel and Robin certainly seem to think so. “No, Drakkar Noir’s some good shit.”

Listen to them chat about perfume for 40 minutes here:

In mid-November, before the snows started flying, I went … Read More :::

Following on from the traumatic loss of the Noilly … Read More :::