You’ll inevitably notice scattered around the Centro Historico in Mexico City a lot of perfume shops.  While this is hardly a remarkable feature in a city of any size, these shops distinguish themselves from your average scent counters in that they are more hands-on affairs.  In a typical perfume shop, you walk in demanding a brand name scent in a box with a logo on it, pay and get out.  In Mexico City, you can ask for a scent by name (even by brand name), but what happens next is that the alchemists behind the counter consult their recipe books and custom build something for you.  It 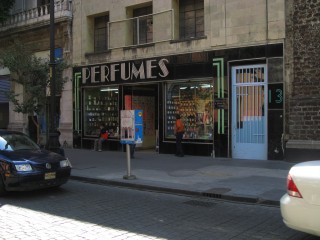 would be unkind to think of these places as knock-off shops.  Whereas an imitation product will boldly print a lookalike label with a subtly different name on it (Chamel No. 5 or something) and sell it as if it were the real deal, the shops in Mexico City will custom mix a bottle of perfume, cologne, eau de toilette or whatever you request, put it in an unremarkable bottle with a plain sticker for a label and your mixologist’s handwriting on the front.  Naturally, this costs a fraction of buying brand-name product from a perfume counter.

When you first begin to notice these places, you’ll likely think to yourself, “Wow, Mexicans are really into perfume.”  But it’s really on Calle Tacuba walking past a string of these shops, their window displays looking more like chemistry sets than displays of luxury goods, that you begin to realise the uniqueness of this enterprise to Mexico City.

I wandered in to a shop called Perfumes (No. 13 Tacuba), attracted by the Art Deco entrance and the window display, which looks more like it’s selling to home darkroom enthusiasts than perfume addicts.  The place was crowded.  Each customer looked to be on a mission, engaged in deep discussion with the women behind the counter who would take their orders and retreat to their mixing stations and return with their goods in small bottles.  My meagre Spanish skills and the long queues intimidated me into exploring other shops on the street, convinced that even if I managed to reach the counter and speak to someone, the conversation would be meaningless.

So I crossed the street to No. 14 Tacuba, otherwise known as Alquimia Perfumes Y Esencias S.A. de C.V.  Much less busy, there was no trouble getting the attention of an employee, and then several employees as my inability to communicate became a group decoding project.  I would have liked to ask them questions about their lives and the nature of their trade, but ended up just pointing at things and mostly being met with a kindly shake of the head.  I’ve really got to learn Spanish.  All the same, they handed me a binder full of brand names and it became clear that

I could pretty much pick something out and ask them to replicate it.  So I chose a certain French brand of men’s fragrance.  The women went away and performed their magic, measuring out substances from a variety of bottles, weighing things on scales and putting the final product into a bottle that would easily cost, oh, I don’t know, a couple hundred bucks standard retail for the size I was getting.  A sticker was slapped on the front, and the word “Hombre” (a literal translation of the French brand name I had asked for) written on it by hand.

As the lady rang up my purchase, she showed me on a calculator the amount I’d be paying: 460.0000-something pesos.  I nodded.  “Well, that’s still a pretty good bargain, I guess.  Not bad.  Well done,”  I thought to myself as I walked over to the cash register, where I was then asked to pay 46 pesos and change.  I must have looked confused.  I’ve paid more for a cup of coffee.  I took my bottle home and compared the Mexican version done up by the alchemists with the real deal which I had a very small quantity of already.  If there’s a difference, my untutored nostrils can’t detect it.

So, while I’m not so sure a hand-made imitation brand perfume from the D.F. would be the ideal gift for that special someone you’re trying to impress (because nothing says “I love you” like handwriting on a sticker slapped on a bottle), this should certainly cause some kind of excitement for the perfume fancier in your life who is kept from her/his favourite scent by a lack of cash.  We all know someone who fetishizes brand names to the point where the bottles on display in their bathroom are mainly intended to intimidate visitors.  The forces of marketing press the vulnerable into a perverse

rationalisation that equivocates an “I’m worth it” message with the kind of phantom value that can only be redeemed by a coreless persona.  If that’s where you’re at, then Calle Tacuba, and Mexico in general, can do nothing for you, for it is by and large an off-brand way of life.  Otherwise, I can recommend a street full of alchemists in Mexico City who will happily provide you with a lifetime supply of your favourite odour for pocket change.  One more item on the long list of things to love about this metropolis.