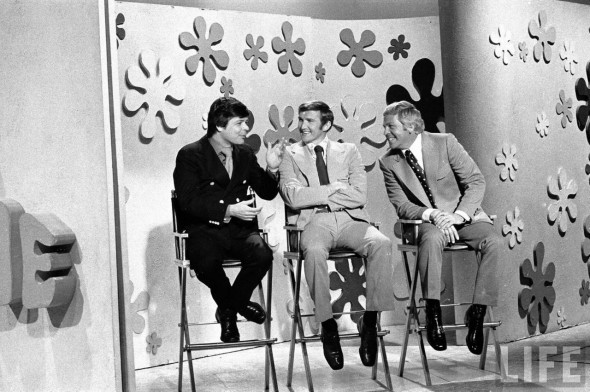 In March of 2011, I was in Toronto for what amounted to a lengthy working holiday.  One Thursday night, coming home a little tipsy, I responded to a request via email from an old friend asking me to participate in an event.  It was pitched to me as a fun art gallery interpretation of The Dating Game, staged by someone who has, as long as I have known her, performed fun, incongruous events in art galleries, places which can usually use a bit of uplift.  I remember her art practice comprising things like choreographing group dances, staging trashy talk shows, collapsing high and low, basically.  Anyway, I agreed, pressed the “send” icon, went to sleep, woke up the next day and realised that I had committed to something that most people, including me in another life, would have declined.  It did, however, go along with my recent resolve to say yes to more things.  The gravity of this commitment became totally clear at around 7:30 p.m. on the Friday, when, in an empty gallery (excepting the other two bachelors and a gallery worker), I saw the set, a partition separating three empty chairs from one empty chair.  This was not going to be some kind of postmodern spin on The Dating Game.  It was The Dating Game, verbatim.  I started to fervently hope that no one else was going to show up, even as I admired the purity of our hostess’ resolve.  Being, however, brand new in this city of Toronto, and seeing as I have staked a certain amount of my identity on being a bachelor, on claiming bachelorhood as my life’s work in fact, I felt it appropriate that it would be great if the place was absolutely packed, maximising the possibility for humiliation.  Who more than me, in that sense, deserved being raked over The Dating Game coals in front of an audience?  I decided to dull the panic by drinking as much wine before show time as I could.  By 8:00 p.m., the place was totally full, and I was squirming in a chair beside two competing bachelors, the bachelorette seated the other side of a partition where we could not see her.  I felt some slight sense of advantage, being a relative unknown in a new city, that freed me from the bounds of propriety.  I could say whatever I liked and care about the consequences even less than I usually do.  I knew three people in a room of maybe 70 or 80.  Others have experienced this degree of terror and survived (usually in more actually terrifying situations like being attacked by a wild animal or being shot at).  Some sense of perspective is necessary, I thought.  Can’t take it too seriously.  Let me preface my account of this evening by saying that I won The Dating Game.  Otherwise, I’m not sure that I’d be writing about it.  This, then, is advice for people who find themselves participating in a restaging of The Dating Game (we happy few), and how to win it.  Good luck to you!  May we all be champions.  Or, as the rules of The Dating Game dictate, exactly one out of three of us.

First thing I’d say about winning is, “Know your audience.”  I’ve been to art school, and a room full of art types is as secondary to me as rain on a Sunday in a graveyard depicted in any sequence of Smiths lyrics.  I know what these people want to hear, basically.  The other two contestants in this event were certainly worthy gentlemen, even as I mercilessly dismantled their game.  It has often been said, relating to romance, “Be funny.”  This is the equivalent for men of women who are told that they must make up for their lack of looks with “personality”, or as Dorothy Parker memorably put it, being a “good sport”.  In this case, you must remember that the bachelorette cannot see you, and you cannot see her, so your words (and tone) are all that you’ve got going for you.  So being funny is, in fact, more paramount than it ever has been.  I can tell you for free that being funny will get you pretty far dating-wise, but much, much farther when a cloak of invisibility is drawn over top of you.  When asked, for example, “What is your most attractive physical attribute?” you’d be a real sucker to respond, as Bachelor #1 did (and also #2!), “I’ve been told my abs,” only to be then forced by the host of the show, “Well, all right, boys, let’s see them then.”  The crowd, unified in a frenzied mob scream of “Abs! Abs! Abs!”, upon seeing your abs, cannot communicate to the bachelorette what your abs actually look like.  She only knows that you’ve made a spectacle of yourself.  So that’s a trap to be avoided.  Also, don’t under any circumstance say, “I’ve been told” anything.  Bad, bad form.  Really bad form.  I do wish in that moment that I had remembered that a girl once said to me, very eye-catchingly, “You have sexy teeth.”  What originality!  Use that one, people.  It works.  As it was, the only thing I could think of, knowing that I’d be commanded to show my physical attribute, was my eyes, at which the audience screamed back in unison, “Eyes! Eyes! Eyes!”

Second bit of advice,  don’t come off too “deep”.  The other gentlemen in this contest got caught up, sensitive men that they are, trying to second-guess what they assumed the bachelorette wanted to hear in the way of how un-manlike they are.  Where they wanted to know the answers to serious questions and whether the bachelorette wanted to go “salsa dancing” (Sounds like a winner, doesn’t it? Until you examine it.), I was content to trawl along the surface, asking frivolous questions like, “Where’d you go to school?  What was your major?”  This accomplished the dual function of making the audience laugh, solidifying my lead yet further, and putting the bachelorette at ease answering softball questions.

If I was guilty of anything, it was probably of being too self-deprecating.  I figured that sinking as low as I could was the right approach.  When asked the question, for example, “What did you imagine you would be doing when you were young, and how does that compare to what you’re actually doing now?” after listening to the other two rationalizing the massive failure that afflicts, oh, just about everyone, “Well, you know, I try to keep it as real as I can,” etc., I could not help but reiterate the thought that dogs me every night as I drift off to sleep: “No, it’s not even close.  If my ambition had been when I was 20 and going to art school to be an auteur filmmaker/raconteur/author/bon vivant-type, then I have definitively failed.”  Commiserating laughter from the audience responding to comments of that type eventually won me the day.  And I hope it convinced at least a few in the audience to drop out of art school and take up some kind of trade.

Afterwards, I was standing around talking with Bachelor #1, listening to him try to turn the loss into lemonade, saying, “Well, you know, it’s cool, it was fun and it’s all experience, right?”  It took every part of my being not to say, “Yeah, but you lost,” or, “You do realise that in life there are winners and there are losers, don’t you?”  It seemed a waste to throw away the opportunity to gloat.

Anyway, in the end, I and the bachelorette won a $25-dollar gift certificate to a fairly pricey restaurant.  We discovered that we’re certainly not made for each other, got drunk and bonded over the traumatic experience we had just survived.  A great post-script that I did not know about in advance is that there was a second round of The Dating Game to be played that evening, this time featuring lesbians.  Being a spectator, watching a whole new set of people squirm, was certainly refreshing after the furnace-like experience of sitting in the bachelor chair.  One of the lesbians performed the song “Love is a Losing Game” (a classic, immortal tune) on ukulele.  Not to mention that their questions were far more invasive and squirm-inducing than the bachelors’.  All in all, a fun evening.  An evening in which I reaffirmed my identity as Bachelor #1.