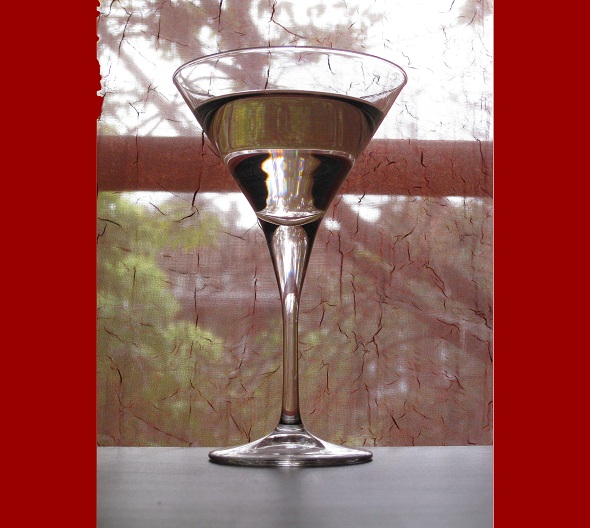 I’ve probably drunk about 10,000 martinis.  Somehow the drink found its way to my heart as a young man, and it’s stayed there all this time.  From the whole wide world of cocktails and drinks (wine, beer, Old Fashioneds, Gimlets, Sidecars, whatever), the clean, bracing blend of gin and vermouth is the only thing that I consume on a daily basis.  I’ve never gotten bored with it.  Whether I’m coming to the end of a long, dreary day or celebrating the end of an exceptionally good one, it’s always the right way to while away the last hours.  I don’t know exactly why this is.  It’s a simple drink, and therefore hard to talk about.  It’s a complex drink because of its simplicity.

It’s like if you walk into a room (a room in an art gallery, let’s say) where there’s a Mark Rothko painting on the wall.  Even better if you don’t know the painting is there in advance.  You can tell what you’re looking at, even out of your peripheral vision.  There’s something ecstatic about it.  The pleasure of it is derived from its purity.  It’s a stern kind of wonderful.

Although I’ve loosened up a little over the last few years in my attitude towards different types of drinks (the Old Fashioned, for example), my loyalty to the martini remains paramount.  Sugar in drinks is something I’ve always kind of relegated to borderline children’s post-dinner cordials, figuring that any drink that had fruit or sugar in it was no better or worse than a Shirley Temple.  I still keep the martini at the top of the cocktail pyramid, but I now acknowledge at least that there is a pyramid.  The contrast with other drinks has helped me realise why it’s so difficult to talk about the martini.  With an Old Fashioned, there’s stuff to latch on to, stuff you can talk about.  With a martini, it’s like trying to talk about light.  It’s like trying to talk about being.

It should go without saying, I know when I’m drinking a bad martini, but I prefer to drink a good one.  How a bartender puts a martini together has become the barometer by which I measure the bar.  If the bartender hits me with a bland martini, I’ll order beer, or maybe wine, for the rest of the night.  Drinking an inferior martini is not the end of the world, but something close to it.  Some of the best bars in the world have failed me on this count, so it stands to reason that my local might let me down occasionally.  It’s a miracle that my local sometimes surprises me.

First consideration, a martini is a cocktail composed of gin and vermouth, pure and simple.  No amount of vodka or any other ingredient comes into it (excepting garnish, which ought to be as minimal as the drink itself).  I’ve felt pedantic on this point when, for example, a proofreader friend of mine, in the interest of verifying some source for a text she was working on, asked me, “How much vodka is in a martini?” I replied with a flustered shake of the head, like I couldn’t answer the question in English.  Vodka?  No.  “None,” I answered.  “There is no vodka in a martini.”  She laughed and patted me on the shoulder, like you would a pouty child.  It was at this moment that I knew that I had a more or less emotional attitude towards a drink that is so iconic that I feel like I am the only person in the world looking out for its interests.  Why do I care about this? it occurred to me.  Is there no one else?

Cocktails are of four varieties.  The martini is that “strongest” of varieties.  There is no sugar, no herb, no water, no citrus.  It is stupefyingly simple.  And for such a simple drink, it’s surprisingly easy to get wrong.  I argue that a minimal amount of vermouth is needed.  Winston Churchill claimed that it was enough to wave the cork from a bottle of vermouth over top of a glass of gin.  In other words, he was a fan of drinking straight gin.  That’s a cute story, and he was a first-class drunk, but that is not a martini.  I go for the 4 oz.-1/2 oz. gin-vermouth ratio, poured over ice in a pitcher or shaker, stirred, then strained over top of a good olive or two in a martini glass.  If you haven’t chilled your glassware (let’s say you forgot to put it in the fridge earlier in the day), the cold of the booze should be enough to at least establish a frosty condensation on the outside of the glass.  This is because you keep gin in the freezer.  Two of these are the greatest way to end any day.