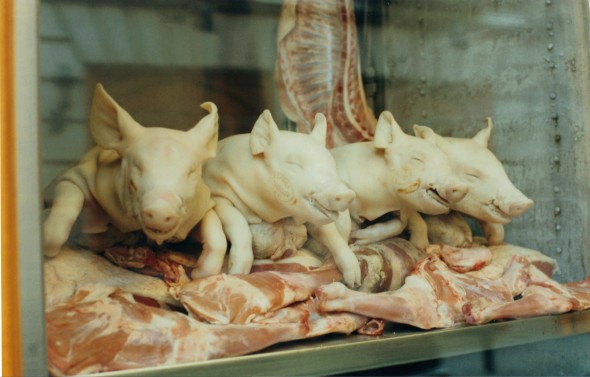 A couple of years ago, I was fortunate enough to be gifted a copy of Jennifer McLaglan’s wonderful cookbook, Fat.  It coincided exactly with my own ethos towards food at that time, obsessed as I was with using off cuts and resisting the hysteria around misunderstood ingredients.   I pored over this book relentlessly and lustfully, using it to learn the craft of making my own confit de canard, as well as incorporating things like bone marrow and tripe into my diet.  So it was with unalloyed delight that I nabbed a copy of her follow-up book, Odd Bits, released late in 2011.  So accustomed was I now to her way of treating food that the novelty factor of the title didn’t strike me at all.  I now regarded “odd” as normal, and was eager to dive into the new book.

Following the recipes in Fat led me into some delightful and odd situations, in which I sought out kidneys, preferably still encased in the heavy layer of fat that surrounds them (butchers usually clean and discard or sell this as lard before putting the kidneys out for sale), and later when I walked into a butcher on Mont-Royal boulevard asking in anglo-inflected French for some “peau de cochon” (pig skin).  The girl behind the counter, thinking I was mispronouncing, replied, “Porc?  Ah, oui, c’est par là,” and gestured towards a gleaming tray full of pork cutlets.  As I reiterated that, no, I was after “peau” and pinched my own skin to clarify, her face transformed from a delighted smile to a twisted, horrified grimace, as if I were requesting materials to construct a costume made of skin that I would then sew together and wear.  I ended up finding an East European butcher who treated my request as absolutely normal.

It’s that dissonance between “odd” and “normal”, something that the East European gets, not to mention most of the rest of the world, that has led to a topsy-turvy alienation between people and food, exacerbated by industrial methods of production.  Not knowing what you’re eating or where it comes from is odd.  Or it should be.  Knowing as much as you can, and appreciating that knowledge, ought to be normal.  But the reverse is the case.  When I was a teenager, I became a vegetarian, which I kept up for eight years.  I rejected meat because it was the most obvious manifestation of the hypocrisy that exemplified pretty much every aspect of life as I had come to know it.  The same person who would eat prime cuts and bacon with abandon would make a sick face if exposed even slightly to the business end of how those cuts came to be on their plates, or even to hear the process described.  In the end, I decided that the only way I could take up eating meat again was to accept the responsibility for paying a butcher to kill on my behalf.

While Jennifer McLaglan is a Torontonian by way of Australia, this attitude towards meat has been pioneered by a food genius from Québec called Martin Picard.  I was lucky enough to nab a copy of his first book, Au Pied de Cochon, and also to live close enough to his restaurant that I’ve been able to eat there several times.  Picard’s genius is in elevating the food culture of Québec to an art form, an approach that could be applied anywhere, embracing and celebrating the culture and cuisine of one’s ancestors rather than putting it out of your mind, regarding food as something that materialises with the push of a button.  To appreciate how far we’ve come in so short a time, the second edition of The Joy of Cooking, printed in the early 1960s, contained diagrams detailing how to skin and prepare a squirrel, an animal running through the yards of the middle classes, the book’s target audience, encouraging them to get out there and kill.  Somewhere over the course of a mere 40 years, such intimate knowledge of game, meat and fish vanished, replaced by a strip of red on white styrofoam that the average person wouldn’t know from which animal it came, never mind which part of that animal it was.  The crusades of Picard and McLaglan have begun the pushback, which needed only a slight push to gather momentum.

It may be no accident that the all-hands-on-deck approach to meat is easier to sell in Québec, which produced two excellent books in 2011, Market Chronicles: Stories and Recipes from the Jean-Talon Market, by Susan Semenak; and The Art of Living According to Joe Beef: A Cookbook of Sorts, by Frédéric Morin and David McMillan.

Every city should be so lucky as to have a farmers’ market, and not many rival Montréal’s Marché Jean-Talon.  The market itself is lucky to have as its chronicler Susan Semenak, whose book introduces the reader to most of the key proprietors at the market, whether butchers, fishmongers or eggmen.  It’s full of spectacular recipes and is thoughtfully organized by season, so you’ll know exactly what to do with that basket of fava beans in June.

These books, alongside McLaglan’s two cookbooks and Picard’s Au Pied de Cochon volume, go a long way towards making up a bookshelf that presents a cohesive food worldview.  While it’s true that this approach has been on the march elsewhere for years, led by celebrity chefs such as Bourdain and David Chang, the title presented by the proprietors of Griffintown’s Joe Beef sums it up best:  the art of living.  Montréal is a place where the average person is a food critic, you’re never more than a couple blocks from foie gras, you can buy a tub of duck fat in the supermarket, wine is regarded as a grocery, and pleasure is still derived from smoking.  Someone I know from Vancouver recently expressed disapproval at the “hedonism” of Montréal.  “Duh!” I replied.  “Why do you think I live here?”

The exclamation mark resting at the end of your Québec-centric bookshelf ought to be Martin Picard’s second book, Cabane à Sucre Au Pied de Cochon.  Thoughtfully released to coincide with sugar shack season, it chronicles his adventure running a cabane à sucre just north of Montréal.  Extending the first book’s genre of edgy, unconventional publishing techniques, no one should be surprised that it, like the old Joy of Cooking, includes a recipe for squirrel.