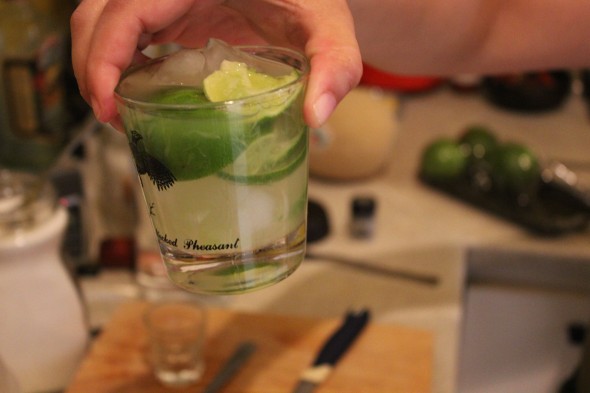 Some weeks ago, I was over at my friends Jenny and Eloisa’s place for a summer party, and Eloisa was operating an assembly line in the kitchen cranking out caipirinhas.  At some point in the evening, she said to me, “Here, I’ll make you a real one.”  I don’t know the difference between a real one and a phony one, so I said, “Sure.”  She had been making the caipirinhas with vodka all night because her own supply of cachaça, much scarcer and more expensive to get here than in Brazil, was very low.  Anyway, at that point, having consumed half a dozen or so of them, I may not have appreciated the subtle difference imparted by an alcohol fermented from cane sugar, rather than a neutral spirit such as vodka.  But I was certainly intrigued enough to go back and ask for a lesson.  If you want to know something about Brazil, ask a Brazilian.

Over the past decade, the drink has gone from being available mainly at common roadside stands, beach huts and bakeries to high end nightclubs and bars outside Brazil.  Likewise with the spike in popularity, different varieties of the drink have evolved.  A caipirinha made with vodka instead of cachaça has always been popular and is called a caipiroska.  Then there are the fruit-flavoured versions, passion fruit being the most popular, with strawberry a close second.  You can also substitute rum for cachaça and call it a caipirissima.  No matter how refined it gets, the caiprinha can’t escape its origin as a drink of the common people, its name derived from the word caipira, which means “hick, yokel, hillbilly” or whatever colourful pejorative you can think of for a hayseed.  “-inha” just supplies a diminutive suffix for anything you feel affectionate about, so the translation for the drink just about means “cute little country bumpkin” or words to that effect.

While purists will shun anything but the classic cachaça, lime, cane sugar and ice recipe, many people prefer the vodka version for the very practical reason that, according to Eloisa, “vodka gives you less of a hangover.”  This jibes exactly with my experience with sugary alcohol drinks (or Champagne) which can pretty much kill you the next morning, compared with the relatively pain free morning-afters inflicted by purer spirits.

The obvious secret ingredient is cachaça, which can be bought either mass-produced or as very small-batch, almost homemade brands.  I begin to get confused during the process when Eloisa starts using the word pinga interchangeably with cachaça.  She tells me, “Cachaça and pinga are synonyms.  Apparently, there are more than a thousand names for it.”  Just like snow.

As for all the brands of cachaça available in Brazil, in North America we’re sort of hostage to whatever the local liquor authority decides to stock.  Some cachaças are better than others, however, and similar to the way you don’t necessarily want to use the finest bourbon when making an Old Fashioned, if you spot a pricey bottle of cachaça it might be better reserved for reverent sipping than mixing into a caipirinha.  Says Eloisa, “When you make really good pinga, then you put it in barrels, to age them.  So they get a lot more character because then they get woody and they get softened.  It softens the taste, so it seems less alcoholic, but it also acquires a character, so you really don’t want to use that for caipirinha.  Sometimes you do it because you’re desperate, you just find a bottle, a super nice one and you make it and just go, ‘Yeah, not that great.’”

There’s a social component to having a drink in Brazil that goes beyond bar culture.  I’m most surprised by the idea that people go drinking in corner bakeries, padarias in Portugese but informally called padocas.  Eloisa explains, “In São Paulo, you go drinking a lot in bakeries.  There’s like the bread section, which is also like a lunch, dinner section.  You can sit at a counter and order a sandwich, or you can order a full meal, rice and beans and meat and salad.  And they have, when you go pay, around the cashier, there’s always a big glass thing that surrounds the cashier, like aspirin and cigarettes, you know, that stuff.  It’s a mix of bakery and that and a bar, so it’s three things at once.  Not all bakeries are like that, but many are.  They put two tables on the sidewalk outside.  And this is probably the cheapest way of drinking, and bars.  You end up going to bakeries because you’re there and your friends say, ‘Let’s go have a beer.  There’s a bakery on the corner of my place.’”

To begin assembling a caipirinha, you have to evaluate your lime.  If you can find key limes (called limão galego in Brazil), those are your ideal.  And if you’re using regular limes that seem like they might be a bit hard or dry, you can help them along by rolling each lime under your palm on the cutting board with some force, to loosen it up a little.  Some people cut the lime into slices and others cube it.  In either case, the white pith running through the centre should be removed.

Then you add sugar to the lime in the glass and gently crush the whole thing with a wooden muddler.  Ideally, you’ll use cane sugar, but can substitute plain white granular sugar.  Using simple syrup would probably work, too, as a sweetener, but Eloisa advises, “you sort of use the sugar as a grit to get the oil out of the skin.”

Then add your cachaça (substituting vodka if you can’t find it) and stir.  Fill the glass with ice.  The ice should be quite small, not like snow or slush in its consistency, but smaller than full-size ice cubes.  Give that a stir and it’s ready.  Transfer it to a serving glass if you’re worried about presentation.

Bartenders who work at beach huts will use these small glasses called americanos.  They fill one glass with the mixture above, put an identical 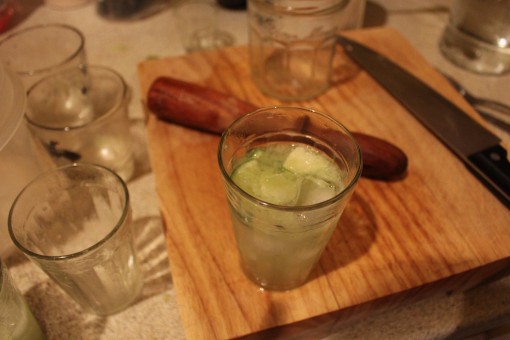 glass on top, wrap a hand around both, sealing the gap, and then shake (see video for demonstration).  Your technique has to be pretty good to avoid spillage, not to mention that it helps if you have hands big enough to do the job.  These bartenders no doubt make hundreds of these per day, so I imagine they have it pretty much down.

This has all made me want to look into booking a flight.  If you do get the chance to go, there is a city that lays claim to being the caiparinha’s home.  “The specialty stores in Paraty,” says Eloisa, “they have everything.  If you go to those stores, they have everything that’s produced in the region in the state of Rio.  They have a wall of just cachaça.  You talk to the guy, because they have cachaças from that area.  You just ask them, ‘I want a very soft one, just to have by itself.  Or I want one to make caipirinha.  I want one with a lot of character, that’s like smoky.’  And they just bring it to you, and they give you to taste, so you leave the store kind of drunk.”

Short of making such a trip, though, you can get by making your own and enjoying Brazil’s national drink in this hemisphere.