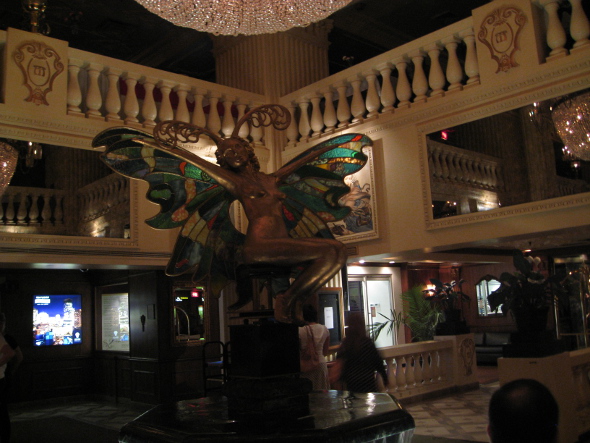 Nothing lasts forever. And so it goes with the Hotel de la Montagne, a storied final piece of the history of old, weird Montreal, now gone. Montreal kept alive so much of what used to be referred to as local colour for so long in North America that its last nostalgic residents who’ve hung in there watching the decline can count on nothing now but their memories. Even the very best of the sad old man bars, the Pub Dominion, has since given way to the admittedly excellent food, cocktails and overcrowding of new, rich Montreal. All cities change. But the way Montreal is changing feels especially dispiriting, given that we still barely have the elusive wild character that most major North American cities have long ago shrugged off and forgotten.

Hotel de la Montagne gave birth to and was a mausoleum for memories. The median age of the clientele was probably about 50. It will all be replaced by a new condo development. They may as well fill it with cement.

I started going to the place because it used to be just a few doors up from the Fine Arts graduate program building (which moved to a different part of town several years ago). So you could often count on seeing one or two, if not a small group of, groovy looking art types sitting in amongst the usual greying crowd, sometimes to laugh ironically at the kétaine surroundings, but mostly to appreciate one of the last places in town that wasn’t a monoculture.

There was a waitress there of indeterminate age, with short red hair and the most ambiguously amoral smile, that I used to refer to as “mother”. Seeing her begin to chuckle (in response to a simple question like “What’s good tonight?” or “Qu’est ce qui ce passe?”) meant the world to me. Perhaps I should have stopped going to Hotel de la Montagne when she retired. The busboy, however, probably in his mid-40s with a curly mullet type haircut, was there until the end. I saw him about a month after the hotel closed, and thought about crossing the street to ask how he was doing.

While there were other bars downtown, there was no other bar with a spectacular water nymph spinning slowly in the middle of a fountain in the lobby, or a doorman wearing a safari hat and beefeater jacket, or the sheer breadth of experience and shared joy brought to the place by its regulars.

As strange and exciting as the downstairs bar was, it wasn’t as weird as the rooftop pool, 22 stories above street level, with great views of the mountain observatory and south shore. The tiny swimming pool was overrun with skinny women in bikinis, with a junkie air about them, who’d wander over to sit at your table and ask for cigarettes. 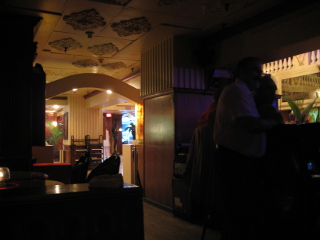 Upstairs, the drinks were never on special. Part of the attraction of the downstairs bar for students was the lure of the cinq-à-huit (not the cinq-à-sept, like at most places), in which all drinks were two-for-one. So part of the fun was in the spectacle of all the tables around you and each person at them carrying on a casual conversation with duplicate bottles, glasses and umbrellas in front of them. It felt like there was always six of everything at every table. It also meant that when the waitresses went around announcing “last call” at quarter to eight, you would find yourself wandering out at 8:15 absolutely loaded in broad daylight at the height of summer. It was at moments like this that you wondered, “What am I doing?”

Towards the end, my friends Lynne and Bernie and I contemplated getting a room for the last couple of days of the hotel’s existence. The cheapest rate available was $225, so we decided against it, opting instead for spending quality time in the downstairs bar. Noting the preponderance of slightly past it pretty women in the room who would shove off on a regular basis to go upstairs with their distinguished older companions, our friend Anthony wondered, “What’s the hourly rate?”

He observed, too, the strange architectural effect of the open, spacious lobby dropping suddenly into the “bunker-like effect” of the low-ceilinged bar.

The place had a lot of bizarre classical touches, such as the portraits of the Greek “Graces” adorning the overhang between the bar and upstairs restaurant. And the Moorish lamp-holders standing sentinel at the bottom of the staircases. And of course the water nymph. The Graces, according to Greek myth, were goddesses of charm, beauty, nature, human creativity and fertility. The Hotel de la Montagne had all of these qualities in spades. 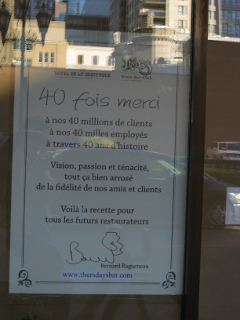 For my part, I divulged to the group on our final evening there my long-standing fantasy of living in the hotel. Coming down the elevator in the morning, wandering past the fountain to ask the front desk staff if I had any messages waiting for me in the old wall-sized rack of wooden mailboxes. Not exactly the wholesome bohemian Montreal that Leonard Cohen mythologized, but a kind of shabby gentility that would have suited me well.

Indignant commentators sometimes question the impulse in Quebec to form a new country inside North America. But what places like the Hotel de la Montagne kept alive perhaps longer than feasible was the notion that each person is different and unique. It’s one thing to declare a difference at the official or mass level, and quite another to keep that difference vital on an individual basis. With the disappearance of this bar, one more refuge for that ideal is gone.

“Is it vacation or travel?” asked the nice American … Read More :::